An Inclusive Summer Dance Project funded by Millennium Stadium Charitable Trust, made exclusively with tablet/phone devices, which we created with the dancers over the 6 week summer holidays in 2017. A project filmed in collaboration with Alex Marshall-Parsons.

Currently working on a collaboration with dancer and international Chinese and flying pole artist, Laura Moy.

We are working together with Dream Audience at Chapter, Cardiff, to explore ways of collaborating, in order to generate a playful, supportive, questioning and nurturing environment for growth.

THE ELEMENTS OF LIFE (at Ty Gwyn)

A 25 minute documentary film, celebrating the development of learners communication through movement, play and film sessions, generated by Creative Practitioners work with teachers and learners at Ty Gwyn special school through The Arts Council of Wales’ Lead Creative Schools Scheme.

The ‘mals had been in storage for some time, and were coaxed out of their matchboxes for this film. Why? Because Laura had told Lara about them and Lara wanted to meet them. She was sure other people would too.

Although a little shy at first, on the second day of filming we took them into the garden and watched as their relationship unfolded.

This film was shown at Chapter Arts Centre, Cardiff as part of Wales Dance Platform, June 2015.

In Autumn 2010 Lara directed and edited her first short film through Dance4Camera3, an initiative run by Welsh Independent Dance at Newport International Film School. The soundtrack features on the B side of a new release ‘Into the Dark’ by composer Sion Orgon.

The movement explored the solitude and ritual of someone waiting to move on and was initially inspired by the remaining residents, squatters and imagined characters of a derelict estate.

The main character moves without sight, on a floor covered with tiny paper squares cut from newspapers. Using tiny scissors, the performer cuts into sheets of newspaper, in an attempt to communicate her feelings.

A one minute film short made in collaboration with Sion Orgon in 2011.

A short film in response to the Art work of Annie Morgan Suganami, with writing by Sandra Bendelow. Created during a week residency in Spring 2014 at Oriel Nwy Aberystwyth Gas Gallery. 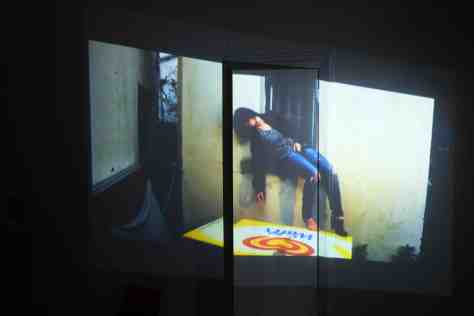 The film was shown as a performance installation with performer Cet Haf, dancing live and a soundtrack composed and recorded by Nick Jones.